The Google map of locations on Old Coffee Road was used by many of the early settlers of south central Georgia, including in the watersheds of the Willacoochee, Alapaha, Withlacoochee, and Little Rivers and Okapilco Creek. It crossed all those and other waterways by ford or private ferry: there were no bridges back then.

The Georgia Historical Commission erected markers at half a dozen locations in the 1950s and 1960, reading:

The Old Coffee Road, earliest vehicular and postal route of this section, running southwestward from the Ocmulgee River to the Florida Line, passed through today’s Lax, Nashville, Cecil, Barwick and Thomasville. The thoroughfare was opened by direction of the State in 1823 under supervision of Gen. John Coffee and Thomas Swain. Over this pioneer route the products of the region were carried to the coast to be sold and imported goods brought back. Sections of the original route are in use today. 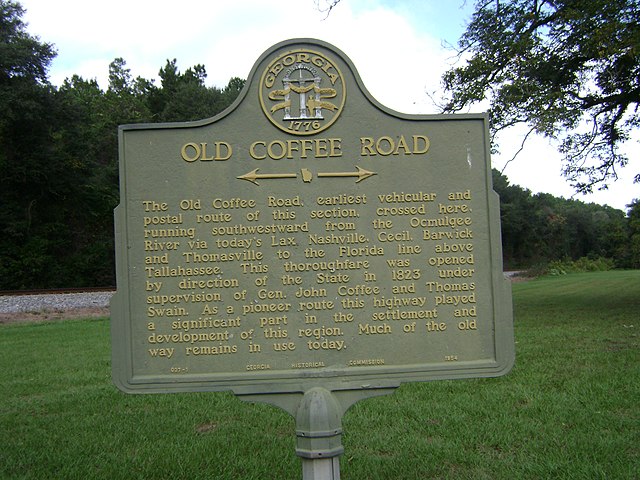 The 22 December 1822 Act of the Georgia General Assembly authorizing $1,500 for the road to be built is in Ray City History Blog, 29 March 2012, Coffee’s Road Passed Seven Miles West of Ray City,

Be it enacted by the Senate and House of Representatives of the State of Georgia in General Assembly met, and it is herby enacted by the authority of the same, That from and immediately after the passage of this act his excellency the Governor be, and he is hereby authorized to appoint two fit and proper persons to superintend the opening of a road to commence on the Alapaha at or near Cunningham’s ford on said river, passing through districts number ten, twelve, and thirteen in the county of Irwin, and number eighteen and twenty-three in the county of Early, pursing the best and most practicalble route until it intersects the Florida line near the Oclockney river.

Sec. 2. And be it further enacted by the authority aforesaid, That the sum of fifteen hundred dollars be, and the same is hereby appropriated to carry the above recited section into effect.

ALLEN DANIEL
Spaker of the House of Representatives

MATTHEW TALBOT
President of the Senate

That from and after the passing of this act, all overseers of roads appointed in pursuance of the before recited act, shall cause their respective roads to be cleared twenty feet wide, except market roads, which shall be cleared thirty feet wide, and shall cause all causeways to be made sixteen feet wide.

Built by slaves is correct as far as I know: that’s not a nice part of history, but it is history. Other sources say two vehicles (horse-drawn carriages) could pass on Coffee Road, so at least twenty feet wide seems much more likely.

Wikipedia also claims the road was built to carry munitions for the Indian Wars, although the Act does not say that. Quite likely it was used for that purpose, following up Andy Jackson’s expulsion of native Americans from the area, before the much better-known Trail of Tears.

Certainly it was used by many early settlers of the region, whose names are still here with their descendants.

Cunningham’s Ford was apparently east of the current town of Alapaha, GA, according to Ray City History Blog, 1 September 2017, Marsh’s Ferry, the Lopahaw Bridge and Tyson Ferry, which also notes the YouTube video of Julian Fields leading a field trip to that location.

Prior to the opening of the Coffee Road in 1823, there were very few pioneer families in all of Irwin County ( then encompassing present day Lowndes, Thomas, Worth, Berrien, Cook, Brooks, Coffee Lanier, Tift, Turner, Ben Hill, Colquitt, and parts of Echols and Atkinson counties). Folks Huxford dated the earliest settlement of present day Brooks County. originally part of Lowndes, as occurring in 1823 after the Coffee Road was opened.

“The influx of settlers was so great that within two years after the Coffee Road was opened up there had moved in approximately two hundred families, so that the southern half of the county [of Irwin] was cut off and made into the new County of Lowndes.“

I’m not sure what the source is of that quotation; probably Folks Huxford, Pioneers of Wiregrass Georgia.

Coffee Road led to the creation and settlement of what became the most populous county in the entire Suwannee River Basin: Lowndes County, Georgia, along with many other towns, cities, and counties.

Last year Coffee Road in Brooks County is where Sabal Trail dug its 36-inch fracked methane pipeline under Okapilco Creek. So we have Spectra Energy of Houston, Texas, since bought by Enbridge of Calgary, Alberta, Canada, taking easements on local land by eminent domain, treating local people much like Andy Jackson treated the native Americans before Coffee Road was built.

Follow this link for the interactive google map, or it’s also embedded below.

It shows the location of the historical markers, and of various roads named Coffee Road, as well as a few other sites known to be on the road.

You can see there are parallel routes in several places, because the original road apparently was not maintained and people cut roads to connect. For example, Ray City History blog says Old Coffee Road crossed the Withlacoochee River on Folsom Bridge, where GA 122 is now. But there’s a Coffee Road in Lowndes County going south from GA 122 to Miller Bridge Road, so Old Coffee Road may well also have crossed the Withlacoochee also at Miller Bridge, where Morven Road, aka Lawson Mill Pond Road, is now.