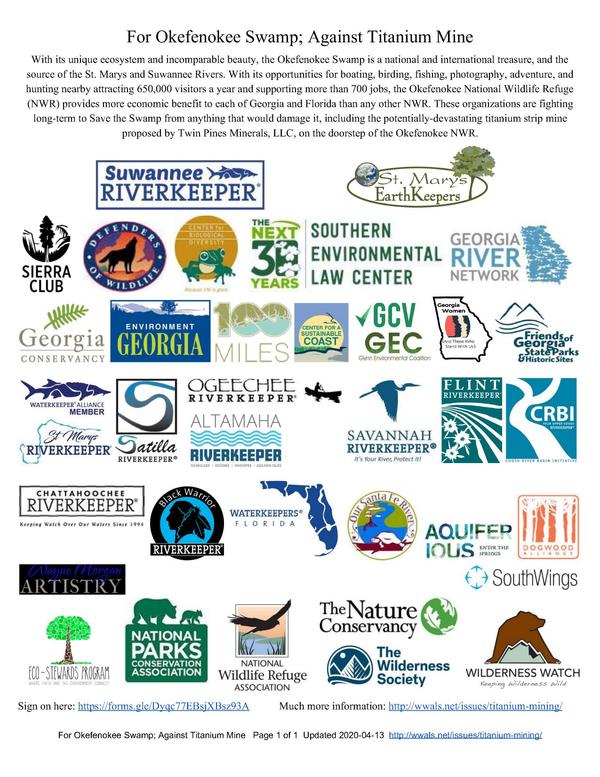 Organizations For Okefenokee Swamp, Against Titanium Mine
PDF
Add your organization here: https://forms.gle/Dyqc77EBsjXBsz93A

Thanks to the Southern Environmental Law Center (SELC) for obtaining the complete application. 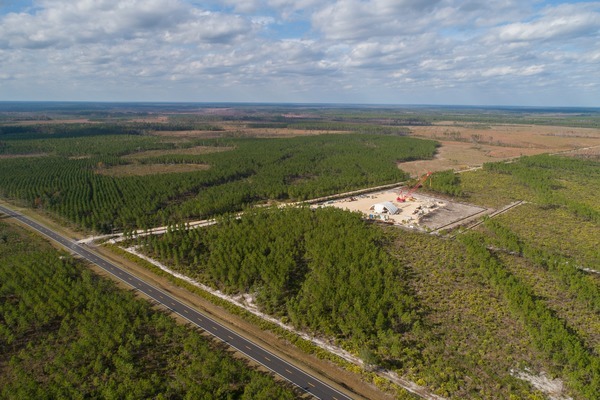 Drone aerial of equipment on Twin Pines Minerals mining site despite no permits, with the Okefenokee Swamp in the background, 2019-11-23 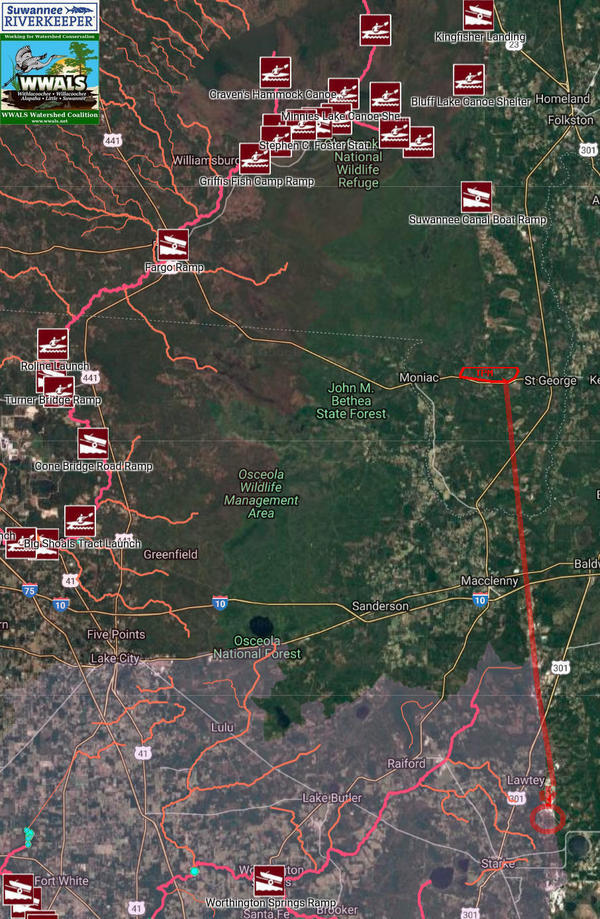 “The Savannah District will hold a virtual Public Meeting for the Twin Pines project on May 13, 2020 from 2:00 PM to 5:00 PM EDT. The meeting will consist of a formal presentation followed by a question and answer session. The meeting will be recorded and published to the Savannah District public website. To allow time for the public to submit questions and RSVP to the public meeting, as well as comment on any information presented at the meeting, additional public comments will be accepted and the original public notice will remain open until May 28, 2020, 15 days after the virtual public meeting.”

However, you can write to your elected officials. And the Corps apparently actually continues to read comments after the deadline, right up until they make a decision. While you are at home because of the novel Coronavirus (COVID-19), you have a great opportunity to write a comment, and to You can also post your comments on social media, as op-eds, etc.

You can write to your Georgia state representative or senator or governor or lieutenant governor and ask them to refuse any such instrument.
To find your legislator you can type in your ZIP code here: http://openstates.org/find_your_legislator/

You can also write to your U.S. Representative or Senator and ask them to urge the Corps to reject this mine or at least require an EIS, like Rep. Al Lawson (FL-05) already did.

You can write to the U.S. Environmental Protection Agency (EPA) asking them to ask the state of Florida to comment.

Here is the pithy request sent by Waterkeepers Florida:

We request EPA to determine, according to 33 CFR § 325.2(b), whether the mining activities of the applicant may affect the quality of the waters of the state of Florida and to notify the state of Florida, the district engineer, and the applicant that Florida therefore “has 60 days from receipt of EPA's notice to determine if the proposed discharge will affect the quality of its waters so as to violate any water quality requirement in such state, to notify EPA and the district engineer in writing of its objection to permit issuance, and to request a public hearing.”

Upcoming in August 2019 are two Public Meetings by Twin Pines Minerals (these are not public hearings; no decision-making government body is involved in organizing these miners' meetings):

This one is a decision-making governmental body:

Feel free to use the following “talking points” in your email:

From the U.S. Fish and Wildlife Service:

“We have concerns that the proposed project poses substantial risks for significant affect to the environment. Should impacts occur they may not be able to be reversed, repaired, or mitigated for."

"Titanium is a common mineral, while the Okefenokee is a very uncommon swamp."

"This will likely change its properties and the hydrology of the area."

Please email the following people and ask that your message be shared with all Commissioners.

The numbers are newest to oldest, and will change as new blog posts are logged.

Here are links to news stories, followed by Editorials, Op-Eds and Letters to the Editor, and Associated Press.

If you know of a story, editorial, etc. that is not in here, please send it to contact@suwanneeriverkeeper.org.

The numbers are in time order, and will change as new articles are added to the top.

The numbers are in time order, and will change as more are added at the top.

Op-Eds and Letters to the Editor

The numbers are newest first, so which op-ed is #1 will change as more get published.

A third AP story, derived from a GPB story, got as far as the west coast:

And this second AP story got a lot of pickups: