Come paddle the idyllic Withlacoochee River in its most urbanized area, Valdosta,

help clean up trash, and do kayaktivism against the Sabal Trail fracked methane pipeline, which would cross only a few miles downstream. This is a WWALS Field Trip from Langdale Park upstream to the North Valdosta Road Bridge, Saturday morning October 3rd 2015, in support of the VSU Anthropology Club, the VSU Sociology Club, and Students Against Violating the Environment (S.A.V.E.), who invite you to Kayaktivism Day 2015!

If I’m not mistaken, Keep Lowndes/Valdosta Beautiful (KLVB), which is having its annual Rivers Alive cleanup the same day, will send some volunteers to the same site at 8:30 AM, so come early and help clean up!

What: First pick up trash, then paddle upstream, lunch near the N. Valdosta Road (US 41) bridge, and paddle back down.

Duration: For the paddle, it took us about an hour yesterday Friday, and we were really dawdling. Add in lunch, and maybe an hour and a half, or call it two hours for time for registration first.

Deadfalls: Who’s in charge of removing those?

Water Level: Hovering just below 4 feet on the USGS gage on the US 41 bridge. If it gets lower, there will be more portaging, unless somebody will take responsibility for removing those deadfalls.

Backup Plan: There is none. This is a Field Trip, not a WWALS Outing, so if there’s massive rainfall we’ll cancel.

The access point for Kayaktivism this Saturday, Langdale Park Boat Ramp, is one of the access points for the Withlacoochee and Little River Water Trail. It’s about ten miles upstream from US 84 and where Sabal Trail wants to cross. For pictures there, see previous post.

Just upstream from US 84 is where the Georgia DNR board last Wednesday gave away an easement to Sabal Trail. It’s not final unless the legislature approves it, and it’s useless if Sabal Trail doesn’t get some other permits.

And don’t forget the hearing 19-22 October 2015 in Jasper or Live Oak, Florida in which WWALS is fighting for the Suwannee River and the Floridan Aquifer against a permit the FL-DEP proposes to issue. You can support that legal work directly by contributing to the WWALS IndieGoGo crowdfunding campaign.

Yesterday Friday Ashlie and I paddled the route for next Saturday’s kayaktivism. Click on any of the pictures below for a larger version.

So we went to the other side of the parking lot.

We’ll probably string a rope or something to make it even easier.

And we can probably remove much of that loose stuff by wading with boots and gloves.

Well, this one is fun to go around, at least.

These logs seem to have been piled up here for quite a while. Can we get them moved before next Saturday?

Driving over that bridge on the busiest highway into Valdosta, you hardly notice the river. Looking up from the river, it’s actually quite a bridge.

Langdale Park actually is just outside Valdosta in Lowndes County. But above the bridge on the east, to the left in this picture, is the Country Club, which is inside the Valdosta City Limits. The Withlacoochee River is the city limit right here.

Just a few miles from I-75, right next to the biggest city in the entire Suwannee River Basin.

A tad greenish, but pretty good.

As in it was 15 feet higher just last December. 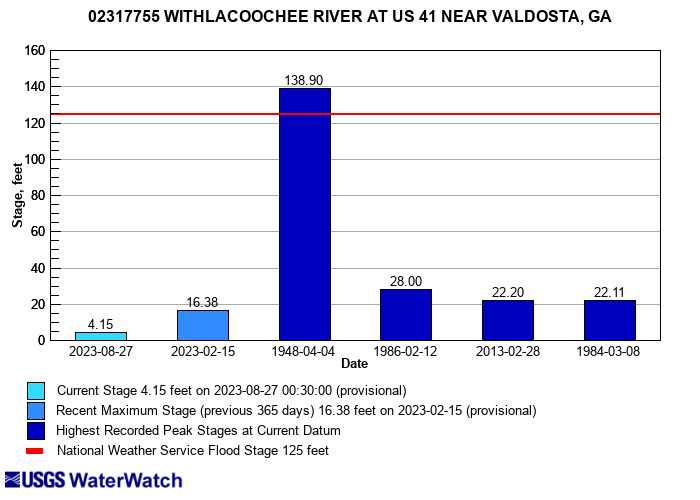 Seems like some of our tax-supported local governments could take care of this.

But deadfalls or no, next Saturday is Kayaktivism Day!