Back in 2009, Lowndes County spent hundreds of times more in infrastructure repairs than the $40,000 that Valdosta is asking as a match to build an online flood warning map, beyond just fixing sewer system spills to dealing with the rest of the flooding problem.

At recent meetings, some County Commissioners seemed reluctant to authorize the request because the proposed map mostly covers subdivisions in Valdosta. But the entire county was affected by road closures in 2009, so maybe Commissioners could ask to expand the map to cover the whole county, which could also help find sources of the flooding problem. Sources and effects extend all the way to the edges of the county, as you can see in this a google map I built back then:

Roads closed in Lowndes County, Georgia, as of 9:38 a.m April 6th, according to the Valdosta Daily Times. This map shows locations and terrain. It’s a Google map, so it’s interactive: you can zoom and pan and change to satellite view, street map, street view, etc. Some of the locations are guesstimates from the cryptic descriptions in the VDT article. The one green blob is the one reopening mentioned in the article: “North Valdosta Road Withlacoochee River Bridge opened at 10 p.m. Sunday.”

That VDT article no longer seems to be online, but this one is. Jason Schaefer, VDT, 27 April 2013, What natural events cost Lowndes taxpayers,

While the 2013 flood did not reach official disaster declaration proportions, Lowndes County Clerk Paige Dukes concedes “it was a mess.” The county spent $60,000 to repair damages to roads, bridges and other infrastructure after the flooding.

The flooding earlier in the year came as a grim reminder of the federally declared flooding disaster in April 2009 in which 175 homes and 20 businesses were damaged, causing an estimated $6 million in individual property damages and costing another $12 million in infrastructure repairs across the county.

Lowndes County was one of 46 counties in all under the 2009 declaration, which affected 1,875 homes and cost $60 million in public infrastructure damages region-wide, said Emergency Management Agency Director Ashley Tye.

Not all the road closures were in low-lying areas, as you can see in the terrain map on the right here. 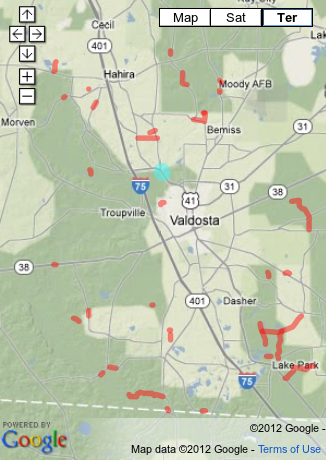 Some, such as the Skipper Bridge Road closure at Hutchinson Mill Creek in the far north center edge of the county were due to deadfalls downstream. Maybe the county could ask Valdosta and the USGS to add as a feature to the proposed map an ability to show on it road closures and other flood events as they happen, using input from the county, its cities, and other sources.

Some Commissioners say they are unconcerned with woods flooding; yet clearcutting and lack of riparian buffers and retention ponds contribute greatly to the flooding problem. A county-wide map could help show sources of the problem.

This is the same reason Lowndes County started paying for a new USGS gage on the Little River at GA 122 after the 2009 floods.

All that plus residents of Valdosta are also citizens of Lowndes County.

Moody Air Force Base is also affected, both by people not being able to get to and from the base during floods, and by being called for disaster support. Maybe the county should also enlist Moody AFB in helping fund and organize this online mapping project.

Downstream in Florida all the way to the Gulf people have been most concerned by wastewater overflows, and understandably so. But the Valdosta wastewater problem finally seems to be fixed. And that was only the most obvious part of the flooding problem. Do people downstream want to have to evacuate riverside houses or close bridges when they might not have to if there was less flooding upstream due to poor development practices?

Sources of the problem go all the way upstream to the top of the Withlacoochee and Little River watersheds. So this flooding problem affects everybody from above Tifton to the Gulf of Mexico.

And the most-populated and most-developed part of that whole area is Lowndes County, which thus both has the most affected people and is one of the biggest sources of the problem.

So please, Lowndes County Commissioners, help solve the flooding problem by helping fund this flooding map. And maybe expanding it to cover the whole county and to incorporate flooding events.