Nobody seems to have done this, so we did: a map of the Suwannee River Basin, with the major watersheds and the Estuary shaded, and all the major rivers, plus many of the creeks. Bonus: springs! 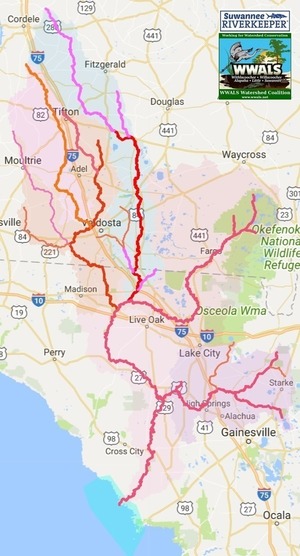 Click on this link for an interactive google map of the Suwannee River Basin.

The river traces come from USGS and Chris Graham. The watershed boundaries are from USGS. The springs are from the Florida Springs Institute, plus four Georgia springs collected by WWALS.

The eight-digit hydrologic unit codes (HUC8) for the Suwannee River Basin are: END_OF_DOCUMENT_TOKEN_TO_BE_REPLACED

Probably the least-known tributary of the Alapaha River, the Little Alapaha River is so shy it disappears underground between Jennings and Jasper, Florida.

Here’s a cutaway diagram of how all that works underground: END_OF_DOCUMENT_TOKEN_TO_BE_REPLACED The New River is rather important, since it forms half of the boundary between Cook and Berrien Counties (the Withlacoochee River forms the other half): END_OF_DOCUMENT_TOKEN_TO_BE_REPLACED