Mostly all clear on the Withlacoochee River in a bunch of data Valdosta and FDEP posted recently, except a bad reading at Knights Ferry Friday a week ago, and yet again a problem at GA 133 this past Monday.

The latest (Wednesday by Valdosta and Thursday by Madison Health) indicates good quality for this weekend. Since there has been hardly any rain to wash anything into the river, all the WWALS Withlacoochee River “beaches” remain green on Swim Guide.

Happy boating, so far as we can see! 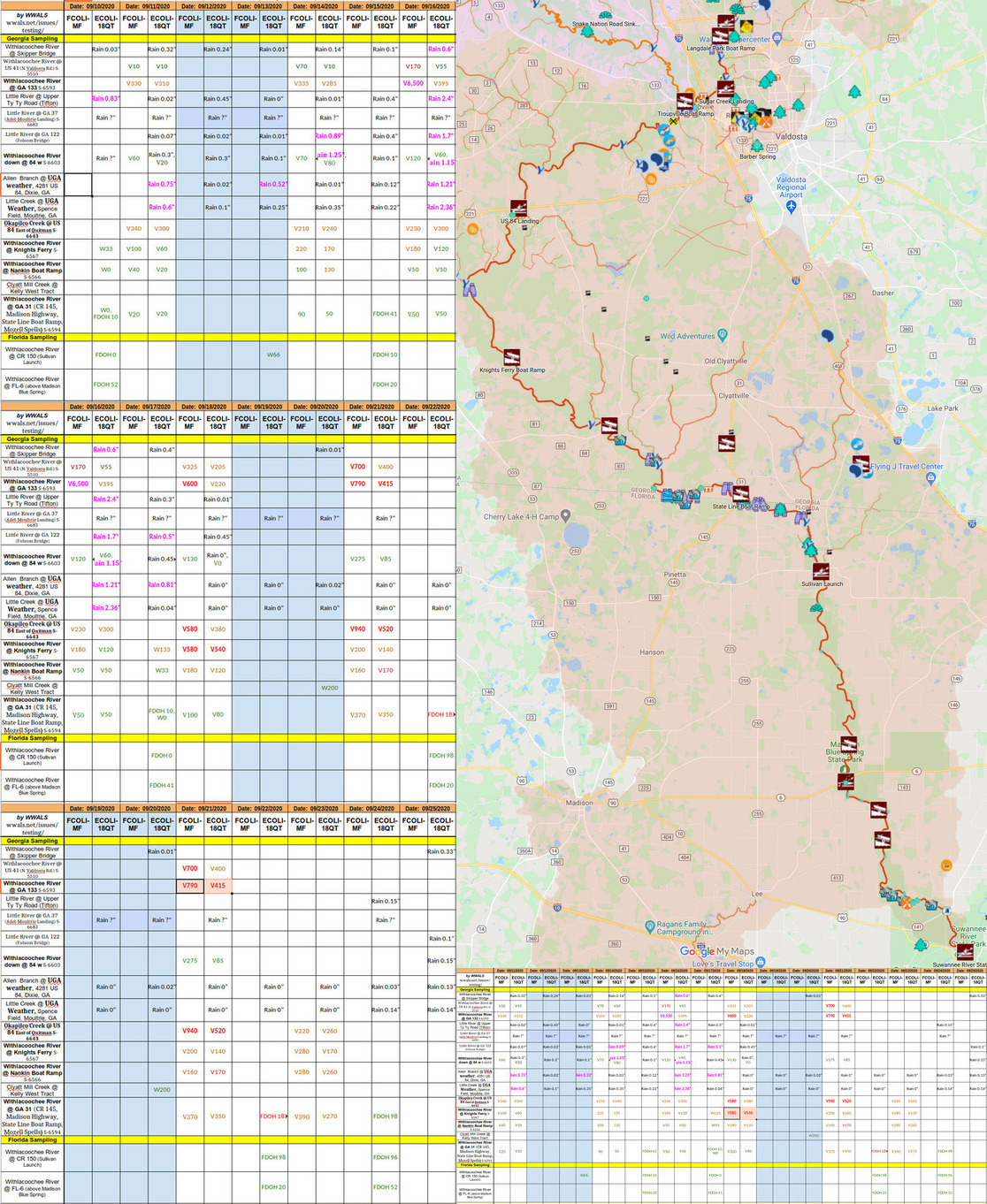 Valdosta’s new data goes back two and a half weeks downstream, and FDEP filled in Tuesday a week ago as well as this Tuesday and Thursday.

That long chart is hard to read, so let’s take it a week at a time. END_OF_DOCUMENT_TOKEN_TO_BE_REPLACED

I put back up a WWALS Caution sign at Knights Ferry Boat Ramp yesterday because of recent bacterial results on the Withlacoochee River; our signs are still up at Nankin and State Line. Thanks to WWALS testers and Madison Health, we have a pretty good picture of creeks and Withlacoochee River health yesterday, to add to what Valdosta got Wednesday. More WWALS testing this weekend. You can help.

And you can watch the livestream Saturday morning (probably today when you read this), April 18, 2020, starting at 8AM, as we demonstrate cleaning up and posting water trail signs at Knights Ferry Boat Ramp. Look for the livestream on the facebook event.

You can’t see E. coli, but you can see trash, such as this at Knights Ferry Boat Ramp, Thursday, April 16, 2020. That location had much less E. coli, 233 cfu/100 mL, than only two days before, as did State Line Boat Ramp and CR 150 (Sullivan Launch), but Nankin Boat Ramp had 800 and Florida 6 had 538, just above Madison Blue Spring. Okapilco Creek was OK at US 84, with 166, but Crooked Creek at Devane Road was horrid with TNTC, Too Numerous to Count. See also What do these numbers mean? END_OF_DOCUMENT_TOKEN_TO_BE_REPLACED

Still bad water quality all the way to Luraville and Mayo, according to FDOH Friday for the Withlacoochee River and SRWMD Saturday for the Suwannee River.

A catalog of WWALS, Valdosta, Lowndes County, FDEP, FDOH, and SRWMD results is at wwals.net/issues/testing/. You can help. 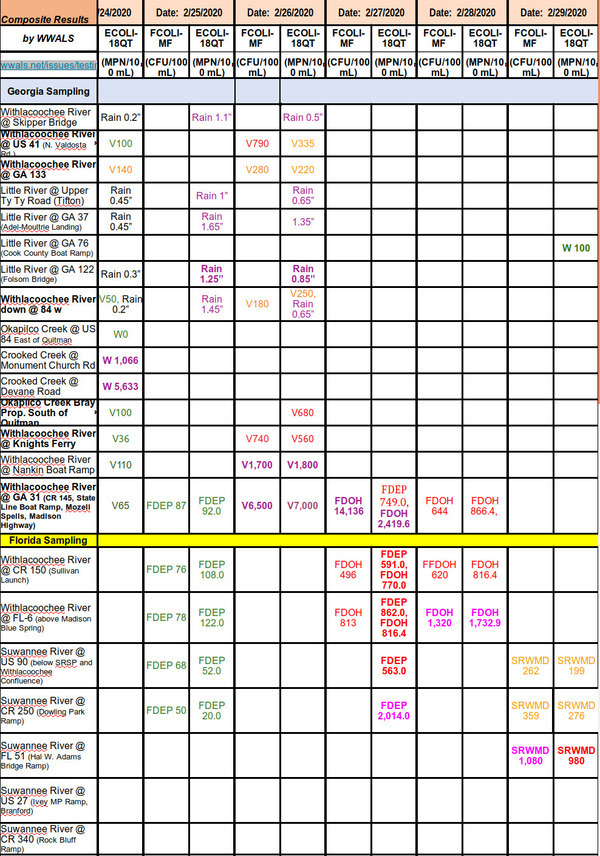 A couple days ago I remarked that nobody knew the water quality of the Suwannee River downstream from Dowling Park, because nobody had tested that. Saturday SRWMD did test down at the Hal W. Adams Bridge on FL 51, between Mayo and Luraville, and the result was above the alert level of 1,000, while at Dowling Park it was back below the too-high level of 410. Apparently something was moving down the Suwannee River.

We still don’t know what’s going on downstream of FL 51, for example at US 27 (Branford) or CR 340 (Rock Bluff Ramp). This is more evidence that we need regular, frequent, testing at all these locations, not just after a spill or other upstream alert.

Thanks to Katelyn Potter of the Suwannee River Water Management District (SRWMD) for forwarding the Florida updates late Sunday evening. Thanks to SRWMD and Madison Health for testing on a weekend, and to Florida Department of Health (FDOH) for helping. Thanks to Florida Department of Environmental Protection (FDEP) and Julie Espy for posting results on an FDEP web page. No update on Valdosta’s results website for Friday yet.

The good news: both Valdosta and FDEP are posting testing results on their websites. There’s a catalog of those and WWALS’ results at wwals.net/issues/testing/.

The better news: Valdosta is testing three times a week, FDOH once a week, and FDEP is testing again, after saying it wouldn’t.

The WWALS results from my Monday samples may help explain this contamination, and it looks like you can see it flow from Crooked Creek through Okapilco Creek to the Withlacoochee and the Suwannee. You can help. 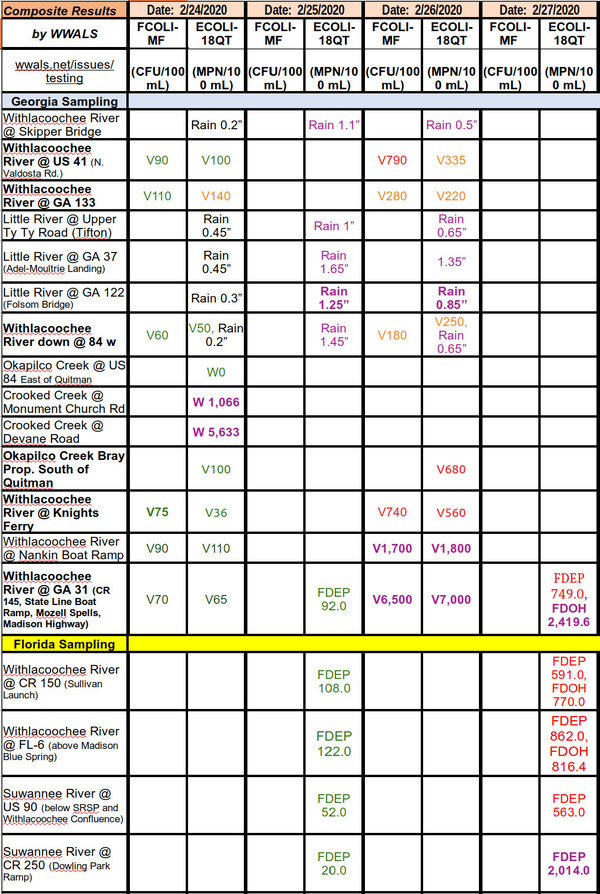 But Valdosta’s Wednesday results also show contamination at US 41, upstream of Valdosta. And FDEP shows a spike at Dowling Park again. So there are multiple sources, not only in Brooks County, Georgia, but also elsewhere. The good news for Valdosta is it doesn’t seem to be coming from Valdosta.

WWALS continues to work on locating sources of contamination. For example, two of us visited the Quitman Land Application Site Wednesday. More on that in another blog post. WWALS testers will be sampling this weekend.

Two of these rows are not like the first, and the middle ones are worst. 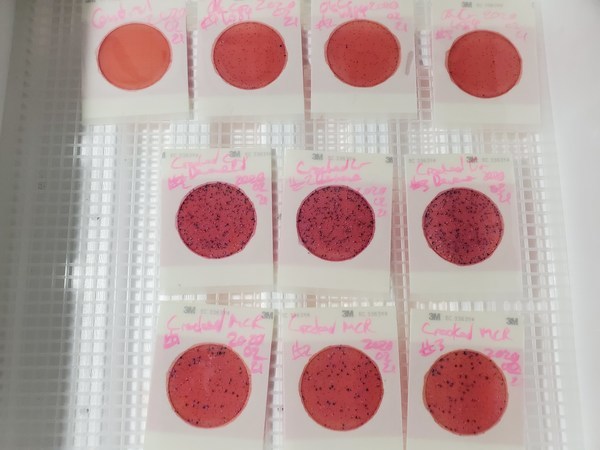 The really ugly plates in the middle were made from water collected at the Devane Road bridge over Crooked Creek, just off of US 84, in Brooks County, Georgia, a bit east of Okapilco Creek, upstream of Knights Ferry Boat Ramp on the Withlacoochee River.

You can see these Friday results are even worse than what the Coles saw Wednesday. In this table of results for this week, focusing on Brooks County and downstream, my Friday Devane Road result is up in the range of what Valdosta saw for Monday at Knights Ferry on the Withlacoochee River. My Monday result for Devane Road was actually taken at US 84, and it would appear I was sampling ditch water, not the main creek. We will be using the Devane Road bridge location for sampling Crooked Creek. And if anyone knows a better name for this creek, let us know. 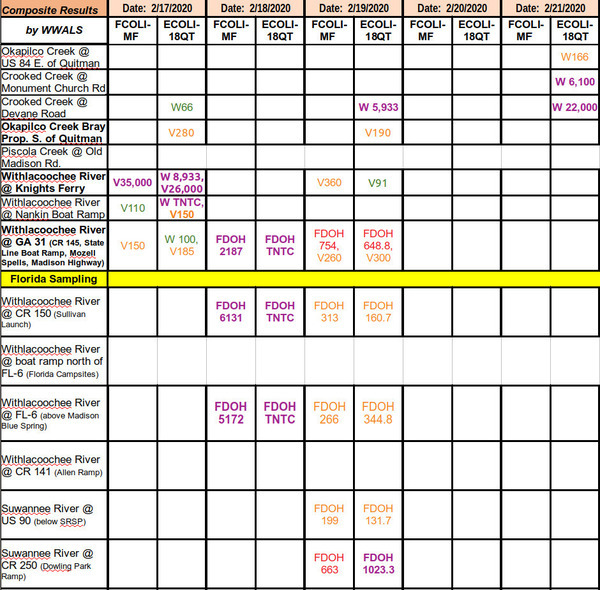 Crooked Creek quite bad
The entire WWALS composite spreadsheet of data from three Florida agencies, WWALS, and Valdosta is on the WWALS website.

I even stopped by Valdosta City Hall Friday to compliment them on something. But there is more Valdosta and the state of Florida need to do.

WWALS will keep testing. You can help.

The first row of plates is END_OF_DOCUMENT_TOKEN_TO_BE_REPLACED

Florida provides Get Out of Jail Free cards for fertilizer, sewage, and manure (FSM), wrote Waterkeepers Florida in this letter sent Friday to the Florida Department of Environmental Protection (FDEP) in its Triennial Review of Water Quality Standards:

If actual substantial harm is eventually found, the only result is a planning processes that lead to Basin Management Action Plans (BMAPs). BMAPs are largely collaborations of the operators of FSM pollution sources, and the only consequence of the failure of the plan to actually curb FSM pollution is a requirement to report the failure. Where BMAPs were hoped to be practical mechanisms to reduce FSM pollution, they have in fact functioned as a “Get Out of Jail Free” card for agriculture industries and other sources of as FSM pollution, while our waters continue to be degraded. The FSM rules have been implemented over the past seven years, during which time, widespread massive algae outbreaks have taken place on the St. Johns River, and in other rivers and lakes throughout Florida. 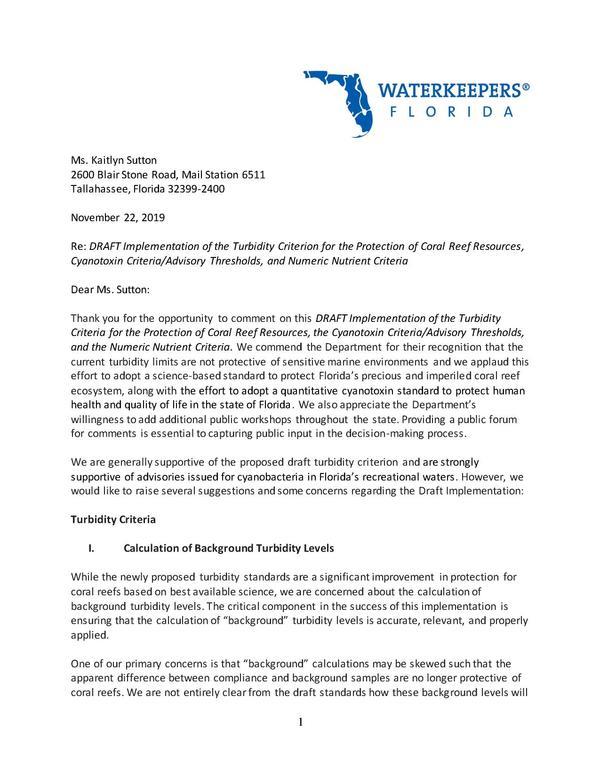 Much of this letter from most of the members of Waterkeepers Florida, including Suwannee Riverkeeper, is about cyanotoxins, which fortunately we do not yet have in the Suwannee River Basin, and coral reefs, which are a southern Florida regional matter. Yet every regional matter affects the whole state of Florida, the southeast, the nation, and the world. For example, about II. Routes of Ingestion:

This calculation only takes ingestion while swimming into account. Exposure to cyanotoxins can also occur dermally and through inhalation of aerosolized particles. These routes are not taken into consideration, as EPA states, because adequate effects data are not available. The relative source contribution that was a part of the 2016 recommendations has been removed, to focus on the ingestion.

Plus people all over Florida and beyond eat fish caught in the red tide areas: how much exposure to ingested cyanotoxins do we all have?