Why should anyone downstream care about an obscure creek north of Valdosta? Because it runs past sinkholes that leak into the Floridan Aquifer, into the Withlacoochee River, then into the Suwannee River, then into the Gulf of Mexico, going by all seven of the downstream Florida counties that passed resolutions asking the state of Florida to do something about Valdosta wastewater, not to mention neighborhoods and wetlands closer to the recent Cherry Creek Lift Station sewage leak, which was at least smaller than previous spills.

The orange red-circled disk shows the location of Cherry Creek Hills. The above map is a screenshot from USGS Streamer. I searched for Cherry Creek, and selected Cherry Creek Hills in Lowndes County, GA. Then I selected “Trace Downstream” and clicked on the Withlacoochee River near the orange disk. With a little panning and zooming, I got a map I could crop to show the Suwannee River Basin from there downstream.

What about the rest of the Suwannee River Basin? OK, here’s the whole thing, with the orange circle still indicating Cherry Creek.

Cherry Creek not shown on Streamer

Streamer doesn’t actually show enough detail to show Cherry Creek, so its downstream trace actually starts at Cat Creek, which is somewhat upstream on the Withlacoochee River from Cherry Creek.

However, you can see on the above map Banks Lake southwest of Lakeland; it’s the blue area and the big round green area with the label “Banks Lake”, just south of GA 122 (the highway running west from Lakeland).

South of Banks Lake is Grand Bay, which is the rest of the connected green area on the above map.

Grand Bay is a cypress swamp much like the Okefenokee Swamp, and managed by the same agencies. Cherry Creek does not drain Banks Lake or Grand Bay: Grand Bay Creek does that, as you can see on the above map. More about that in another post.

Back to the problem area, Valdosta’s Cherry Creek lift station on Bemiss Road that Monday September 11, 2017, during Tropical Storm Irene, spilled 900 gallons of sewage, due to loss of electrical power.

Downstream the 900 gallons of spilled sewage goes through wetlands and past subdivisions. To see that, let’s go to maps from the City of Valdosta: the orange red-circled disk that shows the location of Cherry Creek Hills.

For convenience, I’ve pulled them out into individual JPEG images and PDF files on the WWALS website, some of which are shown below in this post.

This figure shows the watersheds of the various parts of the Cherry Creek Basin.

The topographical lines on this map give a better idea of where the water flows.

That’s a euphemism for flood-prone areas.

Those Valdosta SWMP maps are very nice, but now let’s focus on the problem area. For that let’s use VALORGIS, the Valdosta-Lowndes Regional Geographic Information System. I went to www.valorgis.com, selected Interactive Maps, then in the upper right corner found Layer On-Off, and selected additional layers

The yellow in the upper right corner is an aquifer recharge area in Grand Bay. Cherry Creek starts at a pond just southwest of there. Another branch of Cherry Creek comes down from top center, and yet another from lower left center, across Inner Perimeter Road.

The big green area near the middle is Freedom Park,

with Valdosta’s water wells in it and Valdosta’s Water Treatment Plant nearby on Guest Road. Valdosta had to double the depth of its water wells to get under river water coming from Shadrick Sink, which we’ll come to in a moment.

The big green area in the lower left corner is Langdale Park, with its Boat Ramp. The yellow on both sides of the Withlacoochee River upstream past where Cherry Creek joins it is another aquifer recharge area.

Just northeast of Langdale Park, across North Valdosta Road, aka US 41, is Valdosta Country Club with Stillhouse Branch. Maybe the Country Club would like to help prevent the amount of trash we found there in October 2015.

The above VALORGIS map covers an area similar to this EPA MyWaters map I posted yesterday:

Maybe there’s enough context now to clarify what you’re looking at in the MyWaters map.

Downstream from lift station to river in VALORGIS

Near the middle where the map says “County” is Vallotton Farms, which Lowndes County surprisingly agreed to rezone “backwards” to Estate Agricultural (E-A), which it had been before the county instituted county-wide rezoning in the 1980s and arbitrarily changed it to something else.

This big bit of farmland right on Bemiss Road in what the county calls “Central Lowndes County” messes up the county’s fine plan to develop everything into subdivisions to compete with Valdosta.

And Vallotton Farms is downstream from Valdosta’s Cherry Creek Lift Station. Farmland matters just as much as houses for protection from pollution.

Speaking of houses, people pay extra to live on or near Cherry Lake.

The road across the Cherry Lake dam is closed now, but it used to be great fun for teenagers to drive through “the dip” after a rain, through the runoff from Cherry Lake.

Continuing downstream, you can see a big round pond on the other side of the Withlacoochee River, off of River Chase Drive. That is Shadrick Sink, currently owned by Lowndes County.

Figure E-1. Estimated percentage of Withlacoochee River water in ground water in the Upper Floridan aquifer, June 1991. (Modified from Plummer and others, 1998.)

Shadrick Sink for decades has been leaking river water into groundwater, which travels for miles underground. That is what made Valdosta have to double the depth of its water wells.

VALOR GIS doesn’t show that on the east side of the Withlacoochee River, where Cherry Creek joins it, is another sinkhole. VSU Geology Professor Don Thieme documented that one as it formed in a few months several years ago. Remember, water travels miles underground from sinks such as this. Do we really want sewage getting into the groundwater and moving around towards our water wells, or Valdosta’s?

Both reporters journeyed to Cherry Creek Sink to report about risks of the Sabal Trail fracked methane pipeline causing a frac-out into the ground water.

In April 2016, WWALS invited the U.S. Army Corps of Engineers to come investigate. They declined. WWALS asked the Lowndes County Commission to make a similar invitation. The Commissioners made no answer.

And the Corps issued a permit for Sabal Trail, after which the Federal Energy Regulatory Commission (FERC) in August 2016 gave Sabal Trail the go-ahead to start drilling.

And in October 2016 I happened to be flying over the Sabal Trail drill path on the Withlacoochee River between Valdosta and Quitman, which in fact and saw a yellow boom that it took Sabal Trail three weeks to admit was to catch drilling mud they had blown up from their pilot hole under river, in a frac-out just like we warned about. 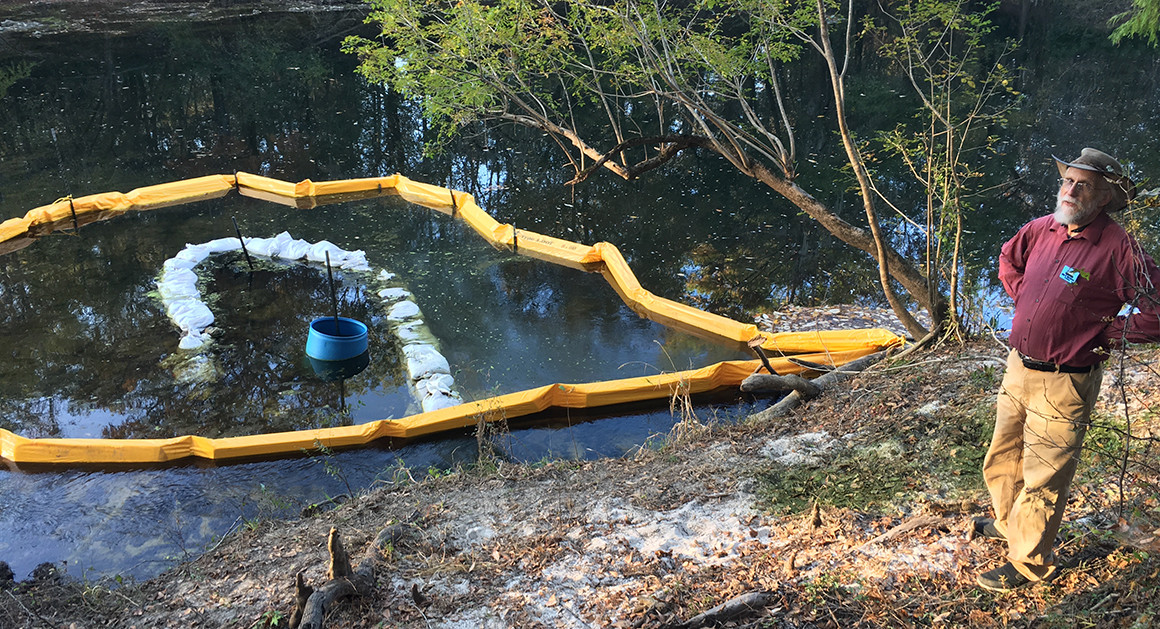 Sabal Trail also caused sinkholes at their drill sites at the Withlacoochee River in Lowndes County, at the Flint River in Doughterty County, GA, and in Florida at the Suwannee and Santa Fe Rivers and in at least two public roads.

But enough about that. This should be enough context about why people even far away should care about Cherry Creek, its lift station, and its sinkhole.

All these sites are on the Withlacoochee and Little River Water Trail (WLRWT). WWALS does hikes sometimes, as well as boating outings. Maybe we should do a hike down Cherry Creek, from the lift station to the sink.