WWALS testers Conn and Trudy Cole found the Little and Withlacoochee Rivers still clean at two spots Friday after the WWALS clean results over thirty river mils Thursday. Crooked Creek was dirty Friday as it often is; see below.

There was a bit of rain yesterday (Sunday), but not much, so cleanliness probably continues. Happy boating, swimming, and fishing!

The week before was not so clean after all. END_OF_DOCUMENT_TOKEN_TO_BE_REPLACED

“Something looking funny at one mile,” reported Scotti Jay Jones last night, from the Wainwright Drive bridge over Onemile Branch.

I would like to compliment Valdosta Utilities and its Director Darryl Muse for being on site and dealing with the situation. We do have a few questions, though.

From Onemile Branch to Baytree Road

Here’s what Scotti saw that tipped him off: END_OF_DOCUMENT_TOKEN_TO_BE_REPLACED

Since its start-up in 2016, END_OF_DOCUMENT_TOKEN_TO_BE_REPLACED

The City of Valdosta is lucky nobody fell into that open manhole it says is part of manhole rehabilitation. That manhole is next to the Azalea Trail where whole families with small children walk, and on Valdosta State University property next to the VSU Recreation Center.

Founding partner Matt Casey argued in court that defendant Trigen-Philadelphia Energy Corp. failed to properly secure the manhole, which had been removed by a homeless man shortly before Gustafsson happened by that fateful day. The trial lasted three weeks, featured thousands of documents and a closing scene that played out as if written in a Hollywood script. As the jury was set to return a verdict, at literally the last minute, the insurer offered to settle the case for $10 million—a sum Casey, in consultation with his client, rejected. Just moments later, the jury awarded the former promising medical student $85 million.

Recently, a state appellate court issued an opinion in an appeal from a judgment in favor of a plaintiff in her lawsuit against the City of Atlanta. The woman filed a lawsuit to recover for damages she incurred after driving into an open manhole. The woman contended that the government should be liable for her injuries because the manhole was a public nuisance. The city appealed a jury finding in favor of the woman, arguing that the woman did not meet her evidentiary burden.

Under Georgia law, a municipality “may be held liable for damages it causes to a third party from the operation or maintenance of a nuisance, irrespective of whether it is exercising a governmental or municipal function.” To recover for damages plaintiffs must present evidence that: END_OF_DOCUMENT_TOKEN_TO_BE_REPLACED

Mr. Quarterman, On yesterday the Department, including Mr. Fowler were in the field preparing for anticipated significant rain events over the next several days. As a result, there was no response within the 5.5-6 hour window you noted in your email. Included in this reply is your email to Mr. Fowler so we all can be on the same page as it relates to your request.

END_OF_DOCUMENT_TOKEN_TO_BE_REPLACED

The good news: both Valdosta and FDEP are posting testing results on their websites. There’s a catalog of those and WWALS’ results at wwals.net/issues/testing/.

The better news: Valdosta is testing three times a week, FDOH once a week, and FDEP is testing again, after saying it wouldn’t.

The WWALS results from my Monday samples may help explain this contamination, and it looks like you can see it flow from Crooked Creek through Okapilco Creek to the Withlacoochee and the Suwannee. You can help.

But Valdosta’s Wednesday results also show contamination at US 41, upstream of Valdosta. And FDEP shows a spike at Dowling Park again. So there are multiple sources, not only in Brooks County, Georgia, but also elsewhere. The good news for Valdosta is it doesn’t seem to be coming from Valdosta.

WWALS continues to work on locating sources of contamination. For example, two of us visited the Quitman Land Application Site Wednesday. More on that in another blog post. WWALS testers will be sampling this weekend.

Here’s why we keep sampling.

Will the Mayor’s Paddle happen as scheduled this Saturday, January 18, upstream (See Albany Herald, January 15, 2020)on the Withlacoochee River?

Here are the plans for the new catch basin at the entrance of Valdosta’s Withlacoochee Wastewater Treatment Plant (WWTP) (see also PDF), obtained via open records request from Valdosta. At least we finally know how big it is: 7.26 million gallons. But is that big enough?

The catch basin is a good idea, and I commend Valdosta on implementing it. However: END_OF_DOCUMENT_TOKEN_TO_BE_REPLACED

A Special Called Meeting of the Valdosta City Council, about Valdosta’s record-largest raw sewage spill in December 2019, and what to do going forward. Attendees will include the North Central Florida Regional Planning Council (presumably its Task Force on this subject), and apparently GA-EPD, EPA, FDEP, SRWMD, and of course Suwannee Riverkeeper. It is a public meeting, so anyone can attend. If it’s run like previous such meetings, anyone can ask questions. We have plenty. I hope you do, too. 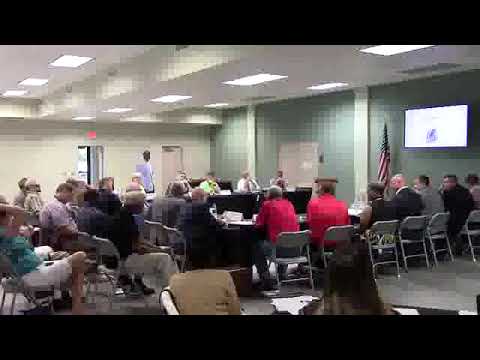