Pete Ackerman, 66, and Kaithleen Hernandez, 21, sit together in a small house in Dunnellon, Florida, with maps and documents splayed out on the walls and the tables around them. They are planning a demonstration for June 9, 2017, which will take place at a large industrial gas compression facility called the Central Florida Hub Compression Station, in Davenport, Florida, 100 miles south of Dunnellon. Ackerman rented the house to serve as an “action center” for those organizing against the large natural gas pipelines being constructed through the southeast United States. They call it the Water is Life House.

“The location of the demonstration on Friday is symbolic,” Hernandez tells Truthout. “It’s where the Sabal Trail pipeline hooks into the Florida Southeast Connection pipeline. It’s where they are going to turn the gas on. This compression station is the biggest one along the route. You can hear it for miles away.”

Later in the article: 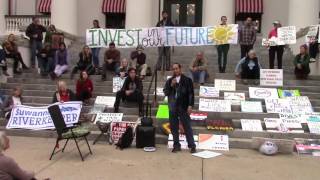 If you had any doubts that Sabal Trail is a boondoggle, our water, land, and wildlife are more important than corporate greed, and we should go solar right now, these speakers may help resolve them.

The indigenous prayers are omitted. I clarified with Bobby C. Billie, and he specifically wanted those prayers omitted, but not the rest of what he and Shawn Mulford said. Yes, the sound is low when Bobby is speaking; he doesn’t like to use a microphone.

Here are links to each WWALS video, followed by a video playlist. You may reuse these videos, provided END_OF_DOCUMENT_TOKEN_TO_BE_REPLACED

For once a news story gives the last word to local water protectors, and it plays up our land and our water.

Richard Luscombe, The Guardian, 24 January 2017, Why a protest camp in Florida is being called the next Standing Rock: At first glance the quiet town of Live Oak seems an unlikely venue for a stand against Big Energy. But in recent weeks it’s become a centre of opposition,

A north Florida river that attracted the state’s first tourists a century before Walt Disney’s famous cartoon mouse is emerging at the centre of a fight against a contentious 515-mile natural gas pipeline that many are calling America’s next Standing Rock.

One section of the so-called Sabal Trail pipeline is being laid beneath the crystal waters of the Suwannee river, whose pure mineral springs were once fabled to cure anything from marital strife to gout.

John S. Quarterman, Suwannee RIVERKEEPER®, will talk about how we all fought the invading Sabal Trail fracked methane pipeline and its extension Florida Southeast Connection for the past three years. Deanna Mericle will talk about what her personal experiences of moving Sabal Trail off the Withlacoochee River in Florida and continuing the fight with WWALS Watershed Coalition through a legal case, WWALS vs. Sabal Trail & FDEP. Merrillee Malwitz-Jipson, Sierra Club Campaign Organizer, will present an extensive list of complaints and violations. The festivities will include #FLEXIT, the Florida Statewide Bank Exit, and delivery of a statement to Governor Scott.

Update 2016-09-16: James Bell of the family being bulldozed right now by Sabal Trail will be at the US 84 Withlacoochee bridge with us 9AM Saturday morning.

Get in the picture on the bridge with boats at the proposed pipeline crossing in the background, on US 84 over the Withlacoochee River, half way between Quitman and Valdosta, GA. You, and the news media, too, are invited this Saturday 9AM! You may have seen Tuesday’s Suwannee River action on WCTV; you can come join us at the Withlacoochee River Saturday. No Dakota Access Pipeline #NoDAPL, No Sabal Trail #NoSabalTrail, #WaterIsLife.

Help demand the Army Corps re-evaluate its permit for Sabal Trail just like its permit for the Dakota Access Pipeline (DAPL). Both pipelines should be canceled: keep it in the ground!

This WWALS Outing is part of the END_OF_DOCUMENT_TOKEN_TO_BE_REPLACED

You are invited to protest Sabal Trail and the Dakota Access Pipeline this Tuesday 5:30 PM! News media are invited. Walk with signs along the bluff to the proposed Sabal Trail Suwannee River HDD crossing, or paddle downstream and back.

We aim to get pictures and video of people on the bluff, beach, and river at the same time demanding the Army Corps re-evaluate its permit for Sabal Trail just like its permit for the Dakota Access Pipeline (DAPL). Both pipelines should be canceled: keep it in the ground!

This WWALS Outing is part of the #NoDAPL Day of Action — Tuesday Sep. 13, tying the Dakota Access oil Pipeline to the Sabal Trail fracked methane pipeline through their ownership by the same companies. This outing is also a followup to END_OF_DOCUMENT_TOKEN_TO_BE_REPLACED

The pipeline companies behind DAPL are END_OF_DOCUMENT_TOKEN_TO_BE_REPLACED

In any review of potential environmental consequences related to the use of Horizontal Directional Drilling (HDD), both the geotechnical and scientific communities can be expected to raise serious concerns when such drilling is done around karst areas, and in regions which over lie the Floridan Aquifer System (FAS), which includes the Upper Floridan Aquifer, and the karstic geologic subsurface features at the location proposed in END_OF_DOCUMENT_TOKEN_TO_BE_REPLACED