Steve Nichols helped remind everyone on the radio this morning that the last chance to send in a song is tonight at midnight, through this form:
https://forms.gle/buQjC4e6oEKDoc537

We also talked about water quality testing (including a grant by Georgia Power), water trails, outings, hats, contacting Georgia Governor Kemp about that titanium mine too near the Okefenokee Swamp, and what is Suwannee Riverkeper, anyway?

You can listen to it all in the facebook video by The Morning Drive with Steve Nichols, starting at 2:34:35.

Thanks again to our top-tier sponsor of the Suwannee Riverkeeper Songwriting Contest, Georgia Beer Co. END_OF_DOCUMENT_TOKEN_TO_BE_REPLACED

Today’s the final deadline to send in your song, and this morning at 8:30 AM, I’ll be on the radio with Steve Nichols, 105.9 FM WVGA, talking about the Suwannee Riverkeeper Songwriting Contest: Art Park, songs, judges, food, drink, prizes, and advocacy, including water quality testing. And our headliner, local stars Dirty Bird and the Flu!

Songs can be about any river, creek, swamp, sink, or spring in the Suwannee River Basin, except the Santa Fe River, which has its own contest.

Song submissions are open until midnight today, July 21, 2020, through this form:
https://forms.gle/buQjC4e6oEKDoc537

That’s the final deadline. This time we mean it. Really. Honest!

Or $12 at the door (children under 12 free). For VIP tables send email to song@suwanneeriverkeeper.org.

Many thanks to our top tier sponsor, Georgia Beer Co.

The Steve Nichols show was the first to reveal the judges are selected. END_OF_DOCUMENT_TOKEN_TO_BE_REPLACED

“We have two returning judges and a judge from a younger generation,” said Contest Committee Chair Tom H. Johnson, Jr. “Submissions are due by July 8. We’d like songs from every age group and every genre.”
https://forms.gle/Ztxm8xmwwoAjPLj86

The new judge this year is Emmy Law, who made a name for herself in Atlanta, and has moved on up to Nashville, Tennessee. She has several songs published.

In his third year as judge, J. J. Rolle plays around Valdosta, Georgia, and has forged as far afield as some years in Ireland. He has a background in musical theater as well as his career as a solo musician.

Back from the first year, Cindy Bear is well known as a solo act around Jacksonville, Florida, and also as half of Bear and Robert (pronounced “Row-bear”), a Blues, Folk and Americana duo with her husband, Franc Robert.

This is the Third Annual Suwannee Riverkeeper Songwriting Contest, this year at 7-9 PM, Saturday, August 22, 2020, in the Turner Center Art Park, 605 North Patterson Street, Valdosta, Georgia 31601. That’s across from the Turner Center for the Arts in Valdosta, GA, with plenty of room for physical distance.

Submissions can be songs about any river, stream, spring, sink, swamp, lake, or pond in the Suwannee River Basin or Estuary (except not the Santa Fe Basin; that has its own contest). Judging of finalists will take into account integrity and value of the waters, historical value, originality of lyrics and music and musical consistency between them, performance, and clarity of message. Extra credit for naming the most rivers (springs, etc.). Even listing them counts; tying them together in a way that shows their value is better.

Meanwhile, tickets are available, $10 online (children under 12 free), or $12 at the door. For VIP tables send email to song@suwanneeriverkeeper.org.

“The Master of Ceremonies will be END_OF_DOCUMENT_TOKEN_TO_BE_REPLACED

Tuesday morning at 8:30 AM, I’ll be on the radio with Steve Nichols, talking about the Suwannee Riverkeeper Songwriting Contest: songs, judges, food, drink, prizes, and advocacy.

Tickets are available, $10 online (children under 12 free), or $12 at the door. For VIP tables send email to song@suwanneeriverkeeper.org.

Apparently we’re such an institution that Scott James thought tomorrow is our fourth or fifth Suwannee Riverkeeper Songwriting Contest, but actually it’s the Second Annual, 1-5PM, Saturday (tomorrow), at the Salty Snapper on Gornto in Valdosta, GA.

Tickets are still $10 online, which gets you closer to the stage, or $12 at the door. The VIP tables of eight right in front of the stage are sold out, but you can still get individual tickets.

Here’s WWALS radio TV (YouTube) of Scott James and I discussing the Suwannee Riverkeeper Songwriting Contest on 92.1 FM WVGA this morning from the steps of the historic Lowndes County Courthouse.

You can listen to the video, although you’ll hear why Valdosta wants a truck bypass around downtown. So I’ve summarized below what we said. END_OF_DOCUMENT_TOKEN_TO_BE_REPLACED

Thanks to Steve Nichols for having me on The Morning Drive with Steve Nichols, 105.9FM WVGA. We talked about water trails, paddle races, and the Sabal Trail pipeline federal eminent domain jury trials, which were being settled as we spoke. Also we hear the Naylor Boat Ramp will be finished soon by Lowndes County.

As I asked Steve about the three jury trials:

This is about federal eminent domain for the Sabal Trail pipeline.

Where: The Morning Drive with Steve Nichols, 105.9FM WVGA
Live streamed on the show’s facebook page

Should be fun. Do tune in.

“It sounds like a wonderful time, to sit there in a great atmosphere, and listen to some good, original music.” 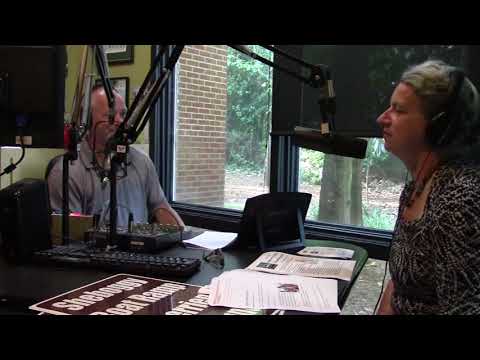 “Finalists will play, and will be judged. The prizes will be awarded, and of course the acknowledgment of the sponsors.”

Plus a buffet of snacks prepared by the Salty Snapper, including some vegetarian, all for $10 in advance online, and there will be a silent auction and kayak raffle tickets.

Gretchen Quarterman was on the radio with Steve Nichols, WVGA 105.9FM (I was scheduled, but the flu said otherwise; I’m better now).

Gretchen said you don’t need to write a song, just come listen to the finals this Saturday afternoon, with judges

Plus the Outings Committee has organized a paddle 9AM Saturday morning from Langdale Park to Sugar Creek Landing, just across the railroad tracks from the Salty Snapper, so you can paddle to the songwriting contest. Steve Nichols remarked:

“As a kid, I used to go down that stretch of the river with my friends. When I say as a kid, I was in high school in the early eighties. It would be fun for me to do that trip as a nostalgic trip, and going back and look at that beautiful stretch of river right there.”

Gretchen said the water is high so probably there will be no dragging, and the river is different every time.

Gretchen also showed Steve copies of the metal signs WWALS Outings Chair Phil Hubbard made and planted at Troupville Boat Ramp. She said those would be at all the landings on the Alapaha Water Trail (ARWT) and the Withlacoochee and Little River Water Trail (WLRWT) as we raise money to put them there.

She showed the metal Sheboggy Boat Ramp signs Phil made to sell so people maybe won’t keep stealing them off the GDOT signposts for their man cave or woman cave.

I’ll be on the radio Friday morning; stay tuned for a post about that.

For more WWALS outings and events, see the WWALS Calendar or the Outings and Events list.