While the Rivers Task Force of the dozen downstream Florida counties is looking for something to do to help, Valdosta clearly hasn’t yet done enough to stop its sewage spills, but they are doing more. Here’s some context that may indicate what might help. Spoiler: water quality monitoring, funding for further fixes, and enforcement if necessary. Unless raw sewage spills really are what Valdosta wants to be known for in Tallahassee and Atlanta.

Also: come on up and talk to the Valdosta City Council. Merrillee Malwitz-Jipson did, and it got their attention. They keep hearing from me for years now, and it helps to see somebody directly affected downstream come up and speak.

This post is mostly about two Valdosta City Council meetings, that included much discussion of the recent Valdosta wastewater spills, on on December 6, 2018 and January 24, 2019, as well as some important events between and afterwards.

But first, what they haven’t talked about yet in those meetings.

Not yet mentioned in Valdosta City Council

2. We also discussed building another catch basin. Almost doubling our storage capacity during storm events. This will be about $1-1.5M so it is not a budget buster.

Since then I hear they’re discussing with the nearby landfill owner a deal of dirt for digging that would further reduce the cost. Apparently they don’t want to bring up this catch basin at a City Council meeting until they have a plan for it with a budget.

I appreciate Council Carroll’s communications. It works both ways: he had not heard about the dozen other Valdosta spills until I told him. He is well aware of my opinion that if Valdosta wants to stop having a reputation of hiding information, it needs to stop hiding information important to the public health.

The most-discussed general topic on the agenda was water, with Utility Director Darryl Muse speaking about bids for 10 emergency standby generators, water treatment chemicals, and a SCADA system for Lift Stations and Water Treatment Plants, with frequent questions from Council members. They did bring up the recent major spill at the Withlacoochee Wastewater Treatment Plant. They approved more than half a million dollars for those improvements.

Many of those dozen other spills still weren’t stopped days later.

GA-EPD surprised everyone, as I told the Valdosta City Council next time I spoke to them. That GA-EPD surprise made it easier for me to find that Valdosta spilled a couple more million gallons of raw sewage. I mentioned that, too.

WWALS invited affected downstream people to come speak at the next Valdosta City Council meeting, and one person came and did that.

After a composite vehicle bid item, the second longest item, at almost four minutes, was Merrillee Malwitz-Jipson, who came from Florida, speaking in CBTH about Florida effects of Valdosta Sewage. Ms. Tooley stopped her precisely at three minutes, but City Manager Mark Barber took most of a minute thanking her for coming to speak. He confirmed that Valdosta officials would be at the next Suwannee River Water Management District (SRWMD) board meeting. Council Tim Carroll and Ms. Tooley also thanked the Florida speaker in Council Comments.

Third longest was probably me (jsq) inviting them to paddle and discussing sewage. City Manager Barber before the meeting said he would be sure he would get to Council the information I presented about Valdosta spills over time.

After the January Council meeting

After the meeting, Merrillee Malwitz-Jipson discussed with Utilities Director Darryl Muse quite a bit. She did not actually recognize him from the tour of Valdosta’s wastewater plants he organized last October at WWALS’ request; I reminded her later.

I did recognize Director Muse, and I made a point of saying he didn’t cause these problems, and he’s trying to fix them.

Merrillee knows, but others in Florida may not: Darryl Muse came to Valdosta from Ocala, Florida, so he is familiar with Florida conditions. Muse is not, however, familiar with the Suwannee River Basin; last October he thought Gainesville was in it.

According to Florida’s Public Notices of Pollution, Gainesville, Florida, also has frequent wastewater spills, although maybe not so frequent or so large as Valdosta, Georgia. But that doesn’t help people in the Suwannee River Basin. Both Valdosta and Gainesville need to clean up their acts.

BMAPs are a different, but much bigger problem

Director Muse also noted that Florida’s Basin Management Action Plans for the Suwannee River Basin show sewage as less than one percent of the problem with contamination in springs and rivers. This is true, but irrelevant. Nitrate leaching into springs does not cause the kinds of direct human health risks that raw sewage does. Nitrate leaching also does not cause Florida health departments to post public warnings, causing people to get off the rivers, adversely affecting economy and everything else downstream.

The BMAPs are not irrelevant to downstream Florida counties. They are actually much more important than Valdosta’s wastewater, affecting as they do the health of all the streams and springs much farther downstream than any sewage from Valdosta will ever reach, and requiring large changes in how agriculture is done in the Suwannee River Basin.

Or could require that, if the BMAPs had any teeth, which they don’t: no new remediation measures (just the same old Best Management Practices (BMPs) that haven’t improved the situation in decades, and no fines or other measures if there is not improvement. While the River Task Force members have the ear of the Florida legislature, they should consider taking up putting teeth into the BMAPs.

This is why we need more water quality testing: regular, frequent, at closely-spaced intervals along all the rivers. WWALS is doing what it can, but more is needed, especialy now that Valdosta has dropped back from weekly to monthly testing. 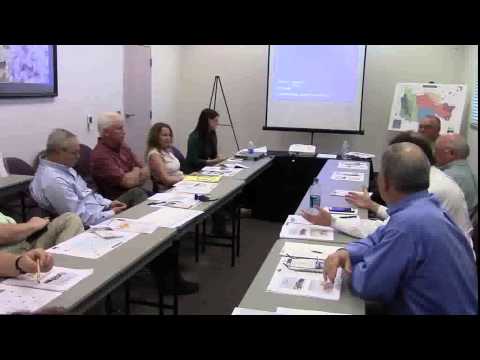 Mayor Gayle, Henry Hicks, and others with Hamilton County citizens about Valdosta wastewater, 2015-03-17.

These problems go back more to Valdosta’s boom days a decade and more ago, when Valdosta encouraged massive population growth without upgrading its sewer infrastructure to deal with it. Valdosta’s wastewater woes were one of the main reasons for the formation of WWALS Watershed Coalition in June 2012, and many of us who formed WWALS were already following the problem before then.

However the problem got started, there is more to be done to fix it. Spilling more than six million gallons of raw sewage in the one month of December 2018 is not improvement.

For much more context and ways you can help, see wwals.net/issues/vww/.