Somebody asked recently whether it is possible to paddle a week on the Withlacoochee River in Georgia in June. Sure, as long as you start not too far upstream on the Withlacoochee and Little River Water Trail (WLRWT), you can paddle past shoals and little-known Georgia springs into the Florida springs heartland, and then continue a day or two on the Suwannee River Wilderness Trail (SRWT). WWALS has paddled many of the most interesting stretches multiple times, often in June.

Your first put in will actually be on the Little River, slightly upstream from its confluence, at Troupville Boat Ramp.

21 April 2018, GA 122 Hahira Little River Gauge 7.2′ (140′ NAVD88).
WWALS did a cleanup at Troupville, in which you can see our water trail signs. See also some history of Troupville, the previous county seat of Lowndes County, Georgia.

At Troupville Boat Ramp, by the signs for the Withlacoochee and Little River Water Trail (WLRWT) that Phil Hubbard planted yesterday (2018-04-20).

Georgia Springs on the Withlacoochee River

Three of the six second-magnitude springs in Georgia used to be in Brooks County, Georgia, before somebody apparently tried to improve one of them with dynamite back in the 1960s at Wade Spring, a bit south of US 84. Wade Spring is a bit of a hike inland, but the two remaining springs are right in the Withlacoochee River.

This one involves clambering up or down steep highway abutment rocks. Nonetheless, we’ve been there many times, because a few thousand feet upstream the notorious Sabal Trail fracked methane pipeline gouged under the river.

28 August 2015, US 84 Quitman Gauge 1.8′ (85.3′ NAVD88),
a brief paddle upstream to the Sabal Trail crossing site. The shoals immediately upstream from the pipeline crossing were walking-only.

The shoals just above the bridge were paddleable.

There is Chamber bitter (Phyllanthus urinaria)

on the highway embankment.

Later that same day, 1.4 inches of rain fell, driving the river up more than 2 feet the next day.

22 October 2016, US 84 Quitman Gauge 1.67′ (85.17′ NAVD88),
Aerial discovery of Sabal Trail boom in the Withlacoochee River, attempting to catch drilling mud blown up through a frac-out from Sabal Trail’s pilot hole under the river.

11 November 2017, US 84 Quitman Gauge 1.73′ (85.23′ NAVD88)
Hike to Spook Bridge, the old abandoned concrete span, when the water looked too low to paddle from the US 84 bridge, although actually it probably was possible. Unfortunately there is Japanese Climbing Fern under the bridge.

We don’t have many pictures from this one.

This is one of our favorite put ins, including in June. 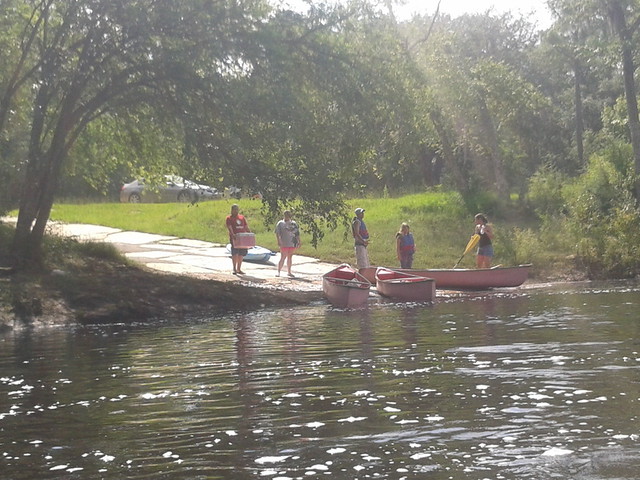 Plus some exotic invasive Japanese climbing fern (Lygodium japonicum), numerous shoals, the abandoned Valdosta Railway Trestle, and paddling into and out of Florida all while going downstream.

Also saw some blooming Halberdleaf rosemallow (Hibiscus laevis All.; each flower blooms only one day),

.
Here is video of Guy Bryant diving McIntyre Spring again. Just as well they went in by land (which you can’t do; they had special permission), since that’s below our recommended low level and you’d probably have to drag boats to get there.

24 March 2018, US 84 Quitman Gauge 5′ (88.5′ NAVD88).
Burt Kornegay from North Carolina paddled from just below Reed Bingham State Park on the Little River all the way to the Suwannee. He liked the Little River better, but there are pictures in that writeup of him at Troupville. Plus he ran into one of our members, diver Britt McClung, talking about about salvage logs and displaying agatized coral geodes, the famous Withlacoochee Agates. The agates are near the state line, but we don’t put where they are on the map, because there are already too many people digging around there, but usually somebody can point it out as we go by. If the water is low, you may be able to see some agates. If not, people will have to dive to see anything.

See the outings above from Nankin Boat Ramp.

24 October 2015, Pinetta Gauge 6.4′ (52.9′ NAVD88)
Sullivan Launch to Madison Blue Spring, including the fallen girders of Belleville Bridge, lamented by older Valdosta State College alumnae who used to hang out on that bridge. Also shoals, rapids, Hardee Spring (for sale for only $8 million), and of course first-magnitude Madison Blue Spring.

24 June 2017, Pinetta Gauge 8.2′ (54.6′ NAVD88).
Really smooth paddling from Sullivan Launch to Madison Blue Spring, although there were still plenty of rapids, and three people fell in. We have a Fallers Award for that. Also Hardee Spring, halberdleaf rosemallow, turtle, and trash collected at Madison Blue Spring.

Say water bottle! No, don’t, you’ll fall in! Hm, but then you’ll win a Fallers Award.

Despite being the only first magnitude spring on the Withlacoochee River, there is no concrete boat ramp at Madison Blue Springs State Park. Instead, there are wooden stairs, recently rebuilt by the North Florida Springs group.

24 June 2017, Pinetta Gauge 8.2′ (54.6′ NAVD88).
Our destination, from Sullivan Launch to Madison Blue Spring, and you can see people spreading out into the river from this very popular swimming hole.

21 September 2014, Madison Gauge, 41′ NAVD88
Here we started paddling past many springs on the Withlacoochee River, especially Suwanacoochee Spring, onwards down the Suwannee River.

There’s always enough water at SRSP and downstream on the Suwannee River.

21 September 2014
Continuing from the Withlacoochee River down the Suwannee, across the former proposed path of the Sabal Trail pipeline, past the Duke Energy Natural Gas Power Plant, past springs, shoals, and sinkholes, past Pilgrim’s Pride’s effluent pipe (we didn’t know that then), finally taking out at Anderson Spring a bit downstream from I-10.

A big feature of the Suwannee River Wilderness Trail (SRWT) is its river camps. You could count Suwannee River State Park itself, which has water, bathrooms, screened pavilions, etc. Downstream there are Dowling Park River Camp, Peacock Slouth River Camp, and Adams Tract River Camp, all before you get to Branford, all conveniently spaced 10-15 miles apart. They’re all marked by little green trees for parks on the map that starts this blog post, which is a static image from the Withlacoochee and Little River Water Trail (WLRWT) Map. We’ve included Suwannee River access points and river camps for this sort of proposed trip.