FPL’s planned-for-a-decade pipeline to the sea just happens to connect Sabal Trail with an LNG export port. Nevermind that this MR-RV Lateral was never run through the FERC permitting process: FERC rolled it into Florida Southeast Connection.

The story said FPL was working with FDEP to determine the final route. It also said:

The project is not related to FPL’s proposed $1.5 billion, 300-mile natural gas pipeline that would have run from Bradford County to Martin County. The Florida Public Service Commission END_OF_DOCUMENT_TOKEN_TO_BE_REPLACED 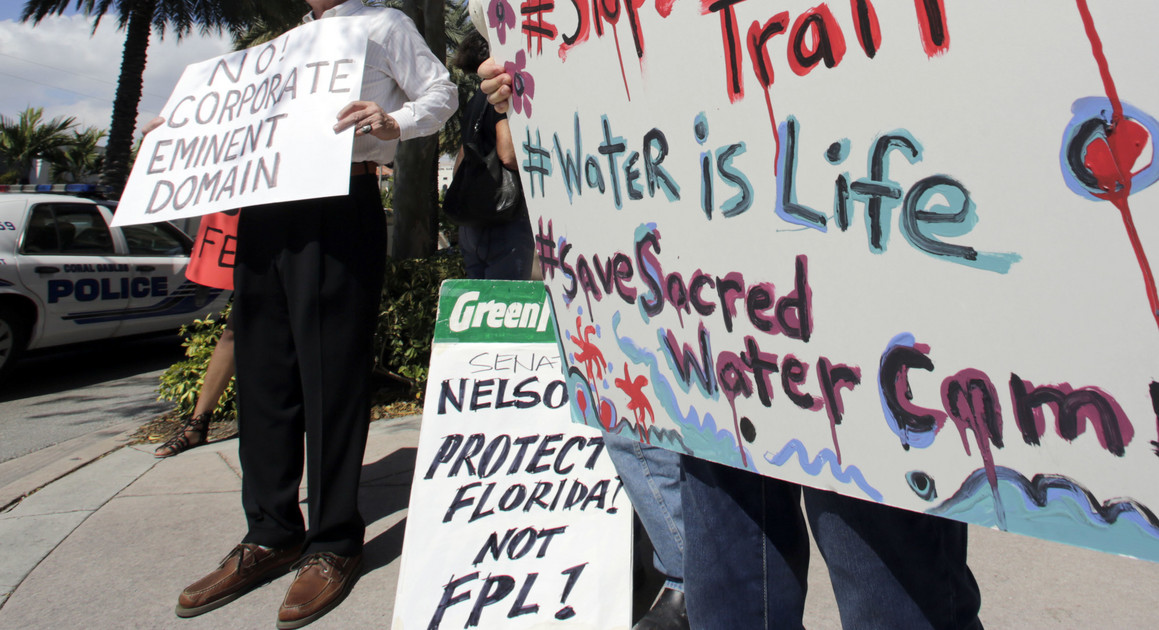 “These exaggerated charges were intended to END_OF_DOCUMENT_TOKEN_TO_BE_REPLACED You can ask the Senate Energy Committee to go beyond that: it can END_OF_DOCUMENT_TOKEN_TO_BE_REPLACED

They finally admit to FERC the Sabal Trail boondoggle is a month late! And FERC reclassifies the WWALS filing as a motion for all three SMPP pipelines.

Sabal Trail Transmission on Friday asked federal regulators for an early June in-service date for its portion of the Alabama-to-Florida natural gas pipeline, a later date than it had requested earlier this month.

On May 17 Houston-based Sabal Trail had asked the Federal Energy Regulatory Commission for permission to start sending gas through the pipeline by today — May 26.

Also Friday, the Georgia-based WWALS Watershed Coalition asked FERC to deny all requests to place the pipeline into service, and said FERC should revoke the permit and shut it down.

The Sierra Club recently asked FERC to delay the pipeline’s operation until after pending litigation is resolved.

FERC has yet to act on either of Sabal Trail’s start-up date requests or on The Sierra Club’s request.

The Palm Beach Post heard of the shooting and did a story, in which Sabal Trail claims their construction is “on target” when clearly it is not.

The $3.2 billion natural gas pipeline is slated to begin bringing fuel to Florida Power & Light’s South Florida plants by June. The pipeline has been the subject of numerous protests by people who say its construction and presence will harm the environment and threaten the water supplied from the Floridan Aquifer, but this is the first death known to have occurred in connection to pipeline opposition.

And the opposition has never killed or injured anyone.

Even as Our Santa Fe River and others held a demonstration in Gainesville yesterday against fracking bills in the Florida legislature, especially Senate Bill 318 now that House Bill 191 passed,

“So my request to you right now: hold off of the emails to the committee, they know you are paying attention.”

This has not sit well with many opponents of fracking in Florida. WWALS is among the members of Floridians Against Fracking that call for Floridians to call their state legislators.

You’ve mostly been hearing about WWALS v. Sabal Trail lately because of all the news coverage related to the petition to FL-DEP, which is great.

But of course WWALS does a lot more than that and WWALS has been around before anybody ever heard of Sabal Trail.

WWALS Watershed coalition and WWALS-Florida which advocate for conservation of Suwannee River and other rivers in south Georgia and North Florida believe the proposed pipeline is not in the public interest and could have severe adverse effects on fish, wildlife, public recreation and navigation.

September 4nd, 2015, Jasper, Florida — Yesterday the Florida Department of Environmental Protection (FL-DEP) asked for an administrative law judge (ALJ) “to conduct all necessary proceedings required by law and to submit a recommended order to the Department”.

FL-DEP apparently interprets its Order of the previous day as dismissing only the petition of WWALS-FL, a Florida nonprofit corporation, and not that of the parent corporation, WWALS Watershed Coalition, Inc. (WWALS). So it seems WWALS gets a hearing after all.

“Everyone told us we’d never get a hearing, so apparently we interpreted the previous day’s FL-DEP dismissal too broadly. But sometimes if you try, you succeed. And WWALS continues to try to stop the unnecessary, destructive, and hazardous Sabal Trail pipeline.”

And it seems FL-DEP is reading the news about this case, because END_OF_DOCUMENT_TOKEN_TO_BE_REPLACED

FL-DEP is reading the news about the WWALS petition, we know because DEP sent a copy of yesterday’s FL-DEP request for an administrative law judge directly to the Palm Beach Post. The Post had already published a story saying the WWALS petition had been dismissed, and changed it to say WWALS has been granted a hearing. (See also WWALS press release.)

A conservation group seeking to stop the proposed 465-mile Sabal Trail natural gas pipeline from boring under the iconic Suwannee River has now been granted its request for a hearing.

The evidence stacks up against the three-part pipeline, Sabal Trail, Florida Southeast Connection, and Hillabee Expansion Project, despite rote denials by FPL and Sabal Trail. And this article ties the WWALS petition against drilling under the Suwannee River with the Georgia opposition to a compressor station in Albany.

A proposed $3.5 billion natural gas pipeline is either essential to Florida’s energy future or a looming disaster that has the potential to damage the iconic Suwannee River and the state’s fragile limestone Floridan Aquifer on its way to Palm Beach County and the Treasure Coast….

In recent months, concerns have been raised END_OF_DOCUMENT_TOKEN_TO_BE_REPLACED