The paddlers are currently in the Okefenokee Swamp, expecting to stay at Mixon’s Hammock, just downstream from Stephen C. Foster State Park, tomorrow. Thanks to Visit Dixie County for a place to park their shuttle vehicle for when they arrive at the end of their journey. We will continue to provide the paddlers information and assistance as they travel down the Suwannee River.

For Immediate Release (Gastonia, NC) — Four friends are embarking on an ambitious expedition to paddle 340 miles from Fort Clinch State Park on the Atlantic Ocean, up the St. Mary’s River, through the incomparable Okefenokee Swamp, and down the Suwannee River to the Gulf of Mexico. Why? For fun…and to help raise awareness for these beautiful and threatened waterways. Trip dates are January 20 — February 16, 2021.

The team consists of END_OF_DOCUMENT_TOKEN_TO_BE_REPLACED

It’s lifted: the bacterial advisory from Madison and Hamilton Health Departments, because of two successive good sets of results from Madison Health on the Withlacoochee River, the lastest for Tuesday. And Valdosta got good results upstream for Monday. All of which corroborates the Thursday Madison Health, Friday Valdosta, and Saturday WWALS results.

We also have more DNA marker data from FDEP, for Wednesday, January 6, 2021, which shows continued high ruminant DNA marker results on the Withlacoochee River, this time for Horn Bridge at the State Line, plus CR 150 at Sullivan Launch, and FL 6 just above Madison Blue Spring. Plus some clarifications of what I wrote in the previous blog post.

Before we get into all that, happy boating, swimming, and fishing on the Withlacoochee River! END_OF_DOCUMENT_TOKEN_TO_BE_REPLACED

The Withlacoochee, Alapaha, and Suwannee Rivers were contaminated with E. coli Monday, January 4, 2021, all the way from US 41 at North Valdosta Road to US 90 below the Withlacoochee River Confluence, and probably farther downstream, according to Valdosta, Madison Health, and FDEP data for that day. We also have preliminary DNA marker results from FDEP.

The culprit? Ruminants. The only ruminants numerous enough to cause the sky-high DNA marker results for the Withlacoochee and Suwannee Rivers? Cattle.

This is a good example of how when testing happens upstream and down, we can all tell what is going on. Florida needs to fund frequent, regular, closely-spaced water quality testing from the state line to the Gulf. END_OF_DOCUMENT_TOKEN_TO_BE_REPLACED

The recent Georgia spills are now in the WWALS composite spreadsheet of Georgia and Florida water quality data.

Other than the very large December 2019 Valdosta spill, none of the spills (except one) obviously correlate with high E. coli as tested.

Which one? The April 24, 2020, Quitman spill, which may have been seen four days later at Running Springs on the Suwannee River.

END_OF_DOCUMENT_TOKEN_TO_BE_REPLACED

Think about it. We have 1,000 people moving to our state every day. That means that over the 20-year life of a BMAP, millions of people will have END_OF_DOCUMENT_TOKEN_TO_BE_REPLACED

The facebook livestream didn’t happen, but here’s YouTube video of yesterday’s Waterkeepers Florida Toast to Earth Day. Most of the fourteen Waterkeepers of Florida spoke.

And you can still pick up trash for Earth Day and post pictures or videos with hashtag #SuwanneeCleanup, as some WWALS members already did.

The Suwannee Riverkeeper segment is at 6:35.

I was at the Withlacoochee River at State Line Boat Ramp, 6461 Madison Hwy, Valdosta, GA 31601. You can’t see in the video, but only a few minutes before, the place was hopping with activity: a guy on a very loud four-wheeler, people in SUVs with beers, two trailers pulling out boats, the former police chief of Live Oak, Florida, and a group of young people hiking back from down the river. All declined to get on the boat ramp to be in the video. They were mostly staying apart from other groups.

We put up these Caution signs because END_OF_DOCUMENT_TOKEN_TO_BE_REPLACED

Fecal bacterial contamination from Georgia probably reached the Gulf of Mexico about March 3, 2020, according to the Suwannee River Water Management District (SRWMD).

Tifton to the Gulf
In the WWALS map of all public landings in the Suwannee River Basin.

The good news: we know about that, because of much more water quality monitoring being done since I wrote a column about the issue last year for The Sun.

This recent testing was provoked by a spill of 7.5 million gallons of raw sewage into Sugar Creek near Valdosta, Ga., in December. With no rain, the sewage sat there for a week, and then moved down the Withlacoochee River in about three weekly globs, at least once reaching the Suwannee.

This Valentine’s Day, Valdosta exceeded our request, testing not one but END_OF_DOCUMENT_TOKEN_TO_BE_REPLACED 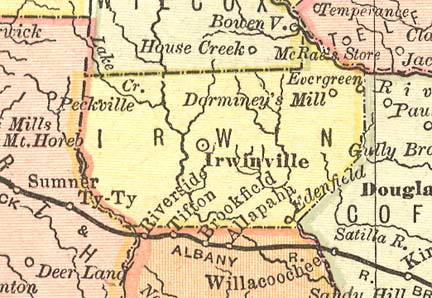 VALDOSTA, Ga., January 19. -[Special.]- Away up near the northern limit of the great wiregrass section there is a big cypress swamp. They call them bays there. From this bay emerges END_OF_DOCUMENT_TOKEN_TO_BE_REPLACED

Instead of giving Sabal Trail a five-month extension, FERC should revoke Sabal Trail’s Certificate of Convenience and Necessity, as the U.S. District Court already ordered. Sabal Trail no longer has the customers for 90+% of its gas on which that FERC’s February 2 Order depended, not since Sabal Trail dropped Duke Energy Florida (DEF) from its customer index on New Year’s Day.

It’s time to stop the fossil fuel industry using Sabal Trail as a political tool to undermine the overall energy stability and security of the U.S. southeast for the profit of a few companies from Texas and Canada. Just like the U.S. State Department recommends for Europe, FERC should seek to diversify energy supplies by getting on with solar power onshore and wind power offshore in the Sunshine State, Georgia, and everywhere else.

What’s that “one additional M&R facility,” Sabal Trail? Is it the one in Suwannee County to feed your fracked gas through END_OF_DOCUMENT_TOKEN_TO_BE_REPLACED

Every few years Banks Lake gets drained is an effort to stymie unwanted aquatic vegetation.

Hydrilla verticillata forms dense mats at the surface of the water. The dense mats can END_OF_DOCUMENT_TOKEN_TO_BE_REPLACED